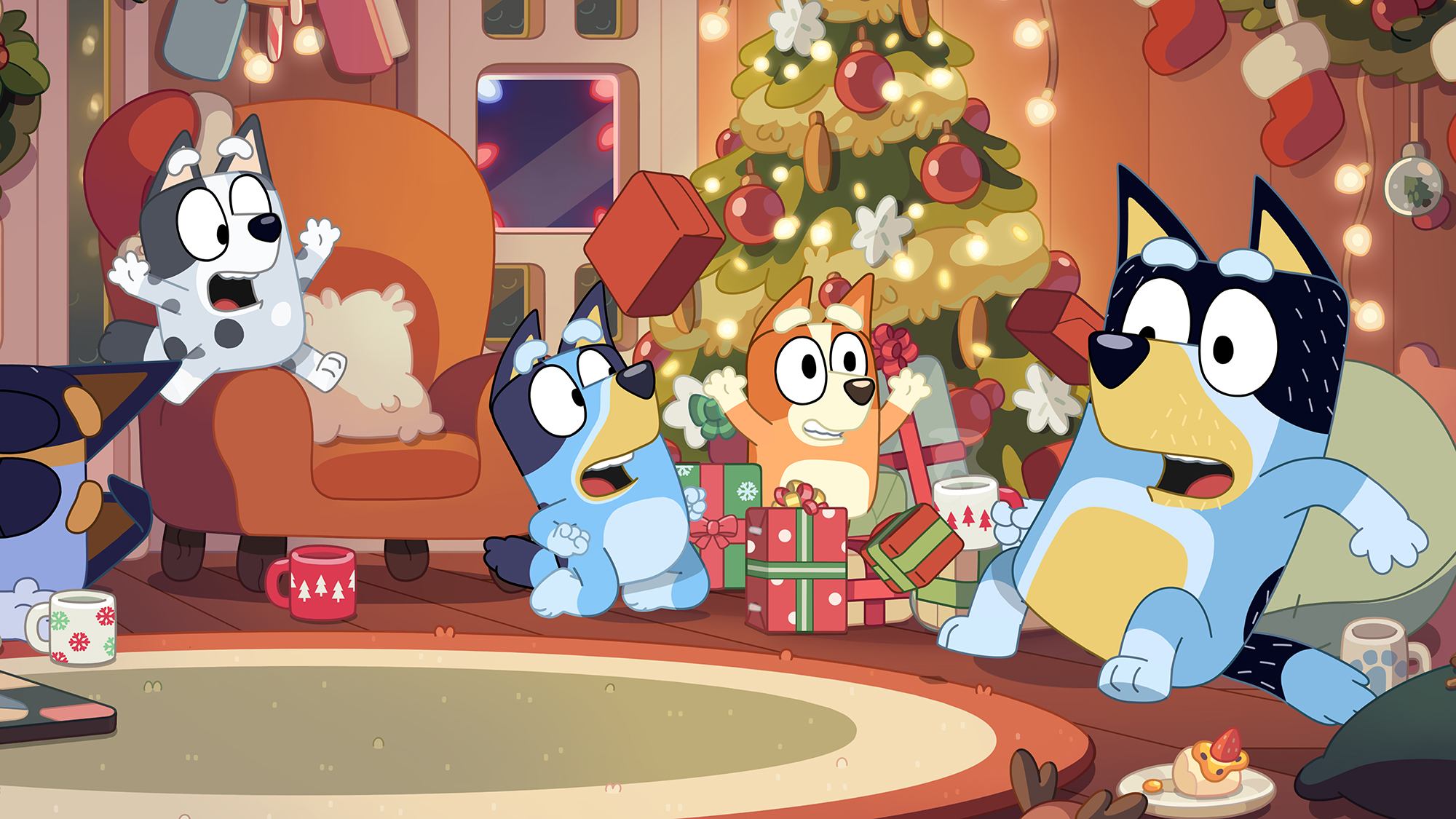 Bluey the most acclaimed children animated TV show aired in ABC launch their special Christmas episode of Bluey- Veranda Santa, on Thursday 12th December at 6:20 pm. This came as a surprise and triggers excitement among the fans considering the Bluey series was to start its second season in February 2020.
Bluey Series
Bluey is an Australian based animated television series that follows the life of the Heeler family. The setting of the show is in Brisbane cand the protagonist of the play is a Blue Heeler puppy, popularly known as Bluey.

In the play, Bluey is often filled with energy, curiosity, and imagination, and is always willing to explore the world. The Heeler family is composed of Bandit and Chilli Bluey’s dad and mum, Bingo- Bluey’s sister, Bluey himself and the extended members of the family.
The show focuses mostly on Bluey’s search for adventure with his younger sister, and their parents who are always caring, yet strict. The series mainly focuses on Australian culture, it’s no wonder it has the highest viewership in Australia. Themes in the show surround family, and kids growing up in Australia. Moreover, each dog in the Heeler family represents a particular type of dog breed.

The New Christmas Episode- Verandah Santa
The anticipated new Bluey Christmas episode is mainly centered on Christmas and family in the Heeler family. The new episode ‘Verandah Santa will focus on Bluey, Bandit, Chilli, and Bingo playing an interesting game which will show who has been more naughty in the household and who has been more nice in the household. From this you can already guess who is naughty and who is nice in the Heeler family.
Although Bluey is mainly a kid’s show, fans range from adults, teenagers to kids, this is due to education and entertainment derived from the show. The trailer of the new episode is out and the date is set, stay tuned for your favorite show.

Have you watched the episode yet? See the below:

Kinda-Mindi Early Learning Centre is a family owned and operated child care provider catering for children from 6 weeks to 6 years of age.

Our educators are passionate about educating and caring for the children in our care. All educators at the centre are highly trained and qualified.

We hope you all enjoy your special morning tea!
Pancake Day
Tuesday 25th February 2020
An initiative connected to Clean Up Australia Day. See your individual service for further details.
Schools Clean Up Day
Friday 28th February 2020
World Hearing Day is held on 3 March each year to raise awareness on how to prevent deafness and hearing loss and promote ear and hearing care across the world. It coincides with Hearing Awareness Week in Australia.
World Hearing Day
Tuesday 3rd March 2020
See your service for details on daily events.
St Patrick's Day
Tuesday 17th March 2020
This National Close the Gap Day, we have an opportunity to send our governments a clear message that Australians value health equality as a fundamental right for all. ANTaR aims to bring people together to share information, and most importantly, to take meaningful action in support of achieving Indigenous health equality by 2030.
Close the Gap Day
Thursday 19th March 2020
The theme for 2020 is " Take Action Together". Everyone has a role to play in saying, 'Bullying, No Way!'.
Bullying Awareness Day
Friday 20th March 2020
See your individual service for details of special events.
Seniors Week
23rd - 29th March 2020
Kinda-Mindi will be recognising this day on Friday 20th March by hosting buffet lunches at all service. Families and educators are encouraged to bring a plate of food from their cultural or family background to share with everyone on the day.
Harmony Day
Saturday 21st March 2020
This is Purple Day! Purple Day was started in 2008, by nine-year-old Cassidy Megan of Nova Scotia, Canada. Motivated by her own struggles with epilepsy, Cassidy started Purple Day in an effort to get people talking about the condition and to let those impacted by seizures know that they are not alone. She named the day Purple Day after the internationally recognised colour for epilepsy, lavender.
Epilepsy Awareness Day
Thursday 26th March 2020
Earth Hour is a WWF-Australia initiative, and is the world’s largest community-driven climate change campaign. At the centre of Earth Hour is switching off lights to show a commitment to taking action. Earth Hour takes place in Saturday 28th March, however, Kinda-Mindi will take part on the Friday.
Earth Hour Schools
Friday 27th March 2020
Centre Policies & Forms